Every year in the middle of Spring, a roomful of silent film geeks (this is a compliment btw) gather at King’s College London for a happy wallow in the world of British silent film. Friendships have been forged through Facebook, Twitter, blogs and, of course, real human interaction and these come together in a lovely group of people who share and talk about their latest silent film findings. In spite of the squirm-inducing lecture room seats, it’s always a brilliant day. This year’s programme covered a terrific range of subjects and angles; happily it’s not intimidating for those of us outside academia. Here’s my round-up of a day that featured moral panics, hidden histories and the sights, sounds and smells of cinema.

Travel time meant that I arrived after the first four talks and it was a shame to miss Lucie Dutton‘s latest archive exposé of the life and work of Maurice Elvey in which she revealed how the machinery of official propaganda worked during the Great War (and maybe still does…). The same was true of Ellen Cheshire‘s keenly anticipated talk on Charlie Chaplin.

George Barker then guided us from the sense of sight to the sense of smell with his talk on the scents of cinema. In addition to the familiar oral histories that recall memories of cinema by the aromas of oranges and peanuts, he has found one story about cabbage leaves. In the early years of cinema exhibition, all sorts of buildings were ‘converted’ into a space to show moving images and empty shops were ideal. If the premises had previously housed a vegetable grocer, then the smell of cabbages lingered on. He also spoke about smoking – it’s the one smell we associate with old cinemas (today it’s popcorn), but it seems that in those early days smoke hadn’t yet permeated the very fabric of the building, so other scents could dominate. This kind of smell archaeology was new to me but opens up a whole new area of imagination.

Mara Arts talked about the royal family on film – not only were they the subject of newsreels, they watched films and probably made their own home movies. Queen Victoria has been called the ‘first media monarch’. Film has been enormously important in crafting how we see the royal family, as in this 1917 Topical Budget featuring King George V and Queen Mary pay a visit to convalescent soldiers in Bath.

Nyasha Sibanda drew on the contents of a 1927 book of minutes from the Kingsway cinema in King’s Heath, Birmingham to work out a detailed financial picture of the local cinema scene as the transition to sound was just beginning. The book records the titles screened, profit and loss, staffing costs, even the weather – I found this especially interesting (sad I know…) as a programmer for a community cinema, I’ve often wondered if the weather affects attendance at our shows (I think it does but have no hard evidence). The question on everyone’s mind was – who was the Belgian violinist? Turns out he was briefly the star of the Kingsway orchestra, but fumbled his career ambitions at the same time as outspending his rather impressive income just when cinema profits were declining sharply due to shifts in the national economy. Few primary sources like this still exist so it was a treat to hear what can be done with the information it contains.

After lunch, which starred fish and chips for most people (perfect Friday fodder), Esther Harper gave a fantastic talk on women jockeys and the films she has found. What a surprise to discover just how early it was that women had made their unofficial mark on the sport, just as they had in painting and various other fields, but with little or no recognition. Esther has found evidence of women jockeys and trainers at Newmarket in racing films from the ‘teens and 1920s, which fits in nicely with my own research on Cambridgeshire audiences in this period. British star Violet Hopson starred in several fictional racing films in the 1920s, in which she actually rode the winning horse.

A 1934 newsreel clip from British Pathé reported Miss Audrey Bell winning her second Newmarket Town Plate “for her sideboard” according to the commentary: http://www.britishpathe.com/video/newmarket-town-plate

Both Henry K Miller and Amy Sargeant looked at Bloomsbury – Henry told of Iris Barry’s film journalism for the Daily Mail in the late 1920s. Part of the Bloomsbury intellectual set, she co-founded the Film Society in 1925 and trod a potentially rocky path between promoting British films for the Society while at the same time for the Mail she openly supported the Quota system, a scheme that caused a decline in the quality of British films. Amy looked at boarding houses in film and literature, especially those in Bloomsbury, for example, the now lost Tilly of Bloomsbury.

Rachel Moseley took us off to Cornwall for a relaxing spot of touring on the train. Rachel described Cornwall’s ‘persona’ on film pointing out how, cinematically speaking, filmmakers focused almost exclusively on the romantic coastline, such as in Claude Friese-Greene’s travelogue Coves and Caves. Inland Cornwall was effectively ’emptied’ of people, industry and meaning, whereas amateur film shot by Cornish residents tended to record the county’s inland life – work, folk traditions and towns. We were treated to a gratuitous glimpse of the latest filmed version of the county in the rather attractive shape of Aidan Turner as Captain Ross Poldark, so here’s more, purely for academic interest you understand – industrial history, the class divide, the status of women etc. It’s not silent, but it is pretty.

Joe Evans (see his blog) an animator and illustrator, drew clear connections from early comics to the way sound was conveyed in silent animation. Think the Adam West Batman TV series with its onscreen Kapow! Splat! and Zlonk! and you’ll instantly get the idea. Words worked as sound in the 1920s, being used to great effect to give the audience a richer experience; they ‘listened’ with their eyes as the story unfolded. Jerry the Troublesome Tyke: His Birthday (1925) has some great examples of this. Jerry was the titular humanoid/dog-like character whose ‘mother was a nib’ and his father ‘a big pot’ of ink. The words could be made ‘shouty’, grow larger or shrink, or shake to convey the necessary ‘noise’. This from British Pathé:

Musicologist Julie Brown talked about music at the cinema in the silent era, noting that an article in the Bioscope in June 1925 marked a new serious interest in music for film. Some of the bigger cinemas were already publishing scores in advance, as was the case with The Epic of Everest in 1924.

Rebecca Harrison has uncovered a hidden story of children’s cinema-going in the Second World War (controversial time switch!). The government tried to solve the problem of evacuees returning home too soon by using a mobile cinema force that took films to rural locations, as a way of giving children something exciting to do and to keep up connections with their lives at home, without actually going home. Due to the restrictions involved in staging film shows in vans, the shows were screened silently, which was, ironically, much more ‘primitive’ than anything they had been used to in their city life, plus the films were often old. One child demanded to be given a ‘Refund or I’m telling my mum, I saw that film two years ago!” 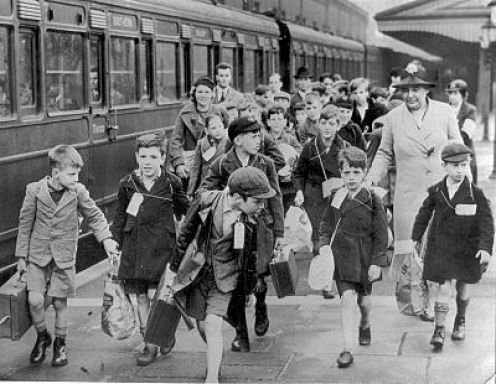 Some newly evacuated children grew bored of life in remote locations, so the government deployed mobile cinemas to bring them a taste of city life and keep them from going home before it was safe to do so.

Geoff Brown and Laraine Porter’s individual talks focused on the transition to sound. Geoff’s entertaining style kept the audience’s mood buoyant as he introduced the rather debatable attractions of Al Jolson’s screen charisma. Laraine neatly summed up the parlous state of British cinema at the end of the silent era, and the aggressive techniques employed by US companies as they set about dominating cinema this side of the pond.

So as always a big THANK YOU to Lawrence Napper and his wonderful team for organising a fantastic day.

Two final thoughts for next year:

If you'll read it then i'll write it!

Creating, Promoting, and Sustaining a New Vision in Stitching and Needlecraft

because facts really should be sacred

The study of history, life, & art on screen & in visual arts.

The Marketplace for all UK Street Food Traders

Life could be a dream...

the view from the dark side: politics, media, cities & culture

I write about politics, nature + the environment. Some posts are serious, some not. These are my views, I don't do any promotional stuff and these views are not being expressed for anyone who employs me.